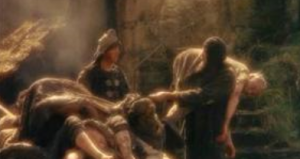 Is it possible that at some point in your life, maybe even at this stage, that others have tried, or are trying to treat you as dead?

Even though, you are very much alive?

The video below is a scene from the movie, Monty Python And The Holy Grail.

It is the “Bring out your dead.”, scene.

A few years ago, before my mother passed away, but certainly after the doctors had told me she had six to twelve months to live, she was still very much alive.

When people would ask me or ask her how she was feeling, we would say fine.

She was, at that time, in spite of the diagnosis, doing fine.

Because of the relationship I had with my mother, we tried to approach challenges with a little humor.

I remember once while sitting in church, fortunately on the next to back row, a visiting evangelist was preaching, very enthusiastically.

He began to speak of government intrusion and the potential for the future euthanasia of the elderly.

My mother, all of eighty two years old, began to get to her feet while saying, “That’s right!  That’s right!”

Loud enough for two rows in either direction to hear her.

I took her by her arm and said quietly but emphatically, “What in the world are you doing?!  Sit down!”

As she plopped back into her seat, she looked at me and said, “He’s right.  If it was left up to you, you would take me to the vet and put me to sleep.”

She was one of those people.

You may have those in your life who have given you up for dead.

King David wrote in Psalm 31, “I am forgotten like a dead man, like a broken and discarded pot.  I heard the lies about me, the slanders of my enemies.”

Sure you may have been run over by the bus we call life.

You may even be seemingly comatose by the injuries inflicted upon you by others, verbally or emotionally, the lies and slanderous allegations.

But, somewhere in there, way down in there, you are very much alive.

And like the gentleman in the scene from the movie you are saying to everyone around you, “I’m not dead yet.”

No one else can determine your fate, nor predict your end.

Only God is allowed that authority.

The Bible even says, “Fear not what man can do to you, not even the taking of your life.  Fear only the One that can take your soul.”

Your days have been recorded, from the beginning to the end.

Not one day has escaped God, nor the plan He has for your life.

His future for you is brighter than your past.

He will show others, through your ability to fight back, that you are very much alive.

Your future is certain.

You will live again and everyone will see it.

Those who have declared you to be dead will see you live.

With their own eyes they will see it, and will hear the words of life coming from you through their own ears.

Be confident in that.

“And this promise is from God himself, who makes the dead live again and speaks of future events with as much certainty as though they were already past.”  Romans 4:17