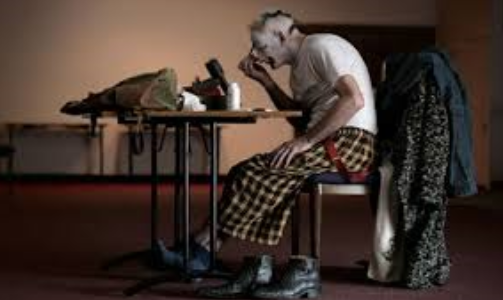 TGIF, on Peachtree Road, in Atlanta, Georgia, at lunch time, on a Friday no less.

It was a fun place to be.

Especially if you are sitting at a table with The Uptown Clown.

I had gotten to know The Uptown Clown through my work with the American Heart Association.

He, the clown and I, were having lunch that particular Friday, and he went as The Uptown Clown.

Not meaning to continue the rhyming pattern, but, that clown turned that place upside down.

The whole restaurant was involved.

We stayed in touch through his volunteerism and became friends.

We were friends before I even inquired as to his “real name”.

It was George Etling.

I learned that George had competed in all types of clown competitions.

There is actually a World Competition for clowns, and he was in it.

As The Uptown Clown, people were drawn to him.

Some time passed and The Uptown Clown stopped by my office.

But not as The Uptown Clown.

I was visibly disappointed.

There is a reason that among professional mascots, Disney characters, etc., they are contractually bound to never be seen, in public, in partial costume.

And no skin or human feature is ever to be distinguishable outside of the character they are portraying.

When George Etling introduced himself, as himself, the magic was gone.

Being around The Uptown Clown was never the same.

Because I did not want to know George Etling.

I wanted to know The Uptown Clown.

In my simple mind, they were now the same.

You and I are very similar.

Oh, at first, I think you are fantastic.

Right up to the point that I discover that you are actually a human being.

Presidents, sports figures, celebrities, parents, spouses, friends, once they disappoint us, they are never the same.

And that is unfortunate.

I had a shocking insight as to this matter recently.

The information was not even verifiable, but my mind accepted it as true.

There was no longer any inspiration to be gained from his lecture nor his books.

Because I now saw him, so I thought, as someone just like me.

That was the agonizing part of this realization.

I have also disappointed people in my own life.

Each of us have at some point.

Some of them I knew.

Some of them I did not.

If those I disappointed, now saw me as I saw the now diminished speaker, no action that I took, nor words said, could take away that disappointment.

They would now see me for who I am.

Disappointment is not fatal.

As I wrestle with these thoughts, I have come to the conclusion, at least temporary conclusion, that after we, I, disappoint someone, we, I, can no longer be who they thought I was.

I now must be simply who I am.

Nothing or no one else.

In the coming days, let’s all give people a little more room to be people.

Let’s allow them to make mistakes and not massacre them for it.

Let’s not disassociate them because they have disappointed us.

…not for who I want them to be.