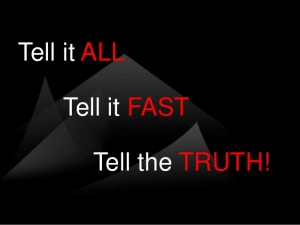 There is an old joke referred to as the Tell It All joke.

It relates to all of us.

Desiring to draw close to God?

Then tell it all.

This is how the joke starts out.

A small town country preacher is praying on a Saturday night and asking God to move in the midst of his congregation the following morning.  God speaks to the preacher and says, “I can’t move in the midst of your congregation, because there is sin in your church.”  The preacher can not sleep that night and he arrives at church the following morning and walks to the pulpit and without any introduction tells the congregation what God had said.  He then tells the congregation they were going to have a tell it all service and were going to confess every sin that they could think of.

As you might imagine the sins start small and grow bigger and bigger, with the preacher firing up the congregation every time a sin is confessed, when one of the deacons in the church jumps to his feet and screams out this awful, awful but funny transgression, the congregation gasps, and the pastor calmly responds, “Brother, I don’t think I would have told that.”

Here’s the tie in.

Nobody is concerned with sin any more.

I have it in my life.

You have it in your life.

Yet we do not talk about it.

I am not even sure what the current religious term is for sin any more.

In recent weeks I have started introducing the word sin back into my vocabulary.

It feels so foreign and people look at you funny when they hear the word used in a sentence.

In recent weeks I have been going through a spiritual reawakening, a coming out of the shadows if you will.

Just yesterday I told someone, if I put a picture of my grandson Beau on my Facebook page, there will be a minimum of one hundred people who hit Like.  If I put a positive quote or something uplifting, again people respond.  However, a couple of weeks ago I was going through what I referred to as a week of conviction and I posted two entries as an update with the subject matter of sin.

There was one response and I quote, “Whoa.”

I then confessed to my friend that along with my recent spiritual awakening and week of conviction, there was one night during that time I layed across what we consider an altar in a prayer room at my home and said to God, “I can not live this way any longer.”, and I began to tell it all to God.  There is something liberating about being totally honest with God, pouring out your heart with nothing withheld.

Let me encourage you to reintroduce the word sin into your vocabulary.

Allow me to also encourage you, and me, to do that which increases our confidence in God, and allow that confidence to grow in us as we acknowledge our failings.

Christ did not die on the cross so that we might have high self esteem.