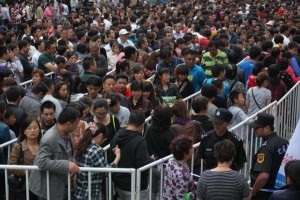 “While I am trying to get there, someone else always gets in ahead of me.”

Who would say such a thing?

Any one of us…at some point in our life.

We wait and we wait and right at the point of sale, or the area of service, some clown breaks in line, right in front of us.

From the Bible, in the book of John, chapter five, a man who is crippled is dropped off at the pool of Bethesda every day, a pool of miracles.  The Bible is descriptive when it says that from time to time an angel would appear and disturb the water and whoever stepped into the water first would be healed.

He had been laying at that same pool for thirty eight years.

Until Jesus came by on a specific day.

When Jesus asked him if he wanted to get well, the man did not answer yes or no.  He said, “I can’t.”

He was by his own answer declining his miracle.

And that is when the man said, “I have no one to help me into the pool.  While I am trying to get there, someone else always gets in ahead of me.”

Jesus told him, “Stand up, roll up your sleeping mat and go on home!”

It was belief in action that the man needed to exhibit and take action in three areas.

(2) “Roll up your sleeping mat.” – That mat has been your false sense of comfort for thirty eight years.  It is now only a memory from the past.

Any of us when faced with an obstacle can easily blame someone else and even say, “I would have done it, and that would have been me, but the other person broke in line and got there first.”

It is your day to move ahead, to not complain about your current place in life, to eliminate the words “I can’t.”, as the man in the story had to, and to roll up any past memories of crippling failure, and to go to where you were destined to go, and not to be who you want to be, but to be who you already are.”