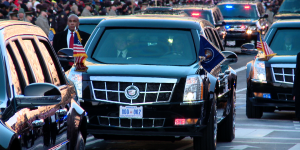 Being a protective type person comes naturally to me.

I am given however at times to over protecting which can be counter productive.

To protect what we care about most, we will do what we least wish to do. Sacrifice ourselves, our wants, our desires, even our life.

No matter the consequences.

Our life is secondary to those we wish to protect.

Years ago, I was very involved in politics and had the opportunity to drive in a Presidential motorcade upon a visit by President G. H. W. Bush to Atlanta, Georgia.

The drivers had background checks and an orientation meeting with the Secret Service.

I was given the assignment of driving the vehicle that is two vehicles behind the Presidential limousine, also known as, “The Beast”.

There would be the limousine, surrounded by many security vehicles and measures, then a large Suburban SUV filled with very large people with guns who would act as a sweeper, then my vehicle which would carry Marlin Fitzwater, the White House Spokesperson, the President’s physician and a Secret Service agent with more guns, and we were followed by many other vehicles, security related and non.

During the orientation meeting, I jokingly asked one of the agents, “Should an event occur, what is the order of priority of protection for vehicles?”

He looked at me without smiling and said, “After the President’s limousine, we don’t give a $#^%())&^!! what happens to you or your vehicle.”

I can appreciate a man with protective priorities.

I also have protective priorities.

We each should have protective priorities.

Laying down one’s life for another regardless of the outcome.

To our own detriment at times, but also to the, at least potentially to the continuation of generations to come.