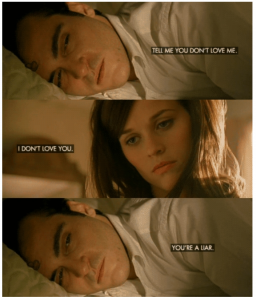 In the movie, Walk The Line, there is a scene where Johnny Cash has collapsed on stage the night before, overcome by the use of drugs.

His tour is cancelled, his band is heading home and he is laid out on a bed in a hotel room, physically still recovering from the incident.

A hand comes into frame checking his fever, and the camera pulls back to reveal June Carter sitting next to him with a disgusted look on her face, her livelihood also affected, looking at this train wreck of a man.

Three of my favorite lines from the movie are these.

Johnny Cash: “Tell me you don’t love me.”

When we love someone, your mouth can say it’s not so, but your heart knows differently.

It is declared without even saying it, “I love you, and no other.”

Love is not a choice.

That love is a choice writes well at times.

Even preaches well at times.

Except it just ain’t so.

I would rather someone say, “You are everything I don’t want you to be, and I love every ounce of everything you are.”

What woman would want to give their life to a man that says, “I had a choice, and I have today, made a choice to love you.”

Love is when you can’t help but love them.

You can not do anything else, but love them.

You try not to.

You wish it away.

You pray it away.

If you can rationalize it, it’s not.

If you can calculate it, it’s not.

If you can determine to or not to, it’s not.

And we love them just the same.

It is the joining of two people, two hearts, two souls, not even physically.

Maybe not even joining.

Love is not being able to separate the two regardless of time or distance.

It is the same with God’s love, shown personally or through another person.

Once you have, not even felt it, once you have experienced it, it is a force where the two can not be separated.

A love that men have died for.

A love for which kingdoms have been won and lost.

A love that women have sworn themselves to.

I had no choice.

His hand upon my life, even at seven years old, was unmistakable.

There was no choice.

No decision card was needed.

Yet there have been times, I must admit, when the following lines could have been scripted in my own life.

He knows me too well.