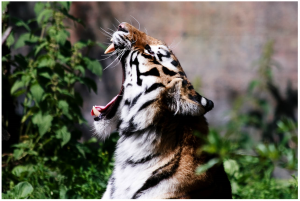 1982 – The song, Eye Of The Tiger, by the band Survivor, was written and produced and became the theme song to the blockbuster movie, Rocky III.  It topped worldwide music charts for months.

In the song Roar, Perry references the Eye Of The Tiger, and repeats the line, “You’re Gonna Hear Me Roar.”

Have you ever been around someone who is the meekest, mousiest, least aggressive person you have ever met?

They have seen enough.

They have heard enough.

They cannot stand it any longer.

One roar is all it takes to alert everyone around you.

“…it only takes one voice, at the right pitch, to start an avalanche.”   Dianna Hardy

It is not the voice of dissidence which is to be feared.

It is the sound of silence for which we should fear.

Who roars for the unborn?

Who roars for the hungry?

Who roars for the poor and displaced?

I have oft said that there is a vast army outside the four walls of the institutions of church, government and business, and they are waiting for a voice of hope to roar, outside the traditional settings.

When it does, that vast army of hopeless individuals will find hope and also roar and shake the world as it has not been shaken before.

They are waiting for the roar of hope.

The individual who considers themselves a champion before the start of the event.

The person who does not require the loud and profane flattery from men, but listens for the quiet accolades from God.

We do not whine.

Those that roar do not accept anything less than victory.

Those that roar stand up and state that which others are afraid to say.

Those that roar write the words that others keep hidden but will not print.

And you’re gonna hear us roar.