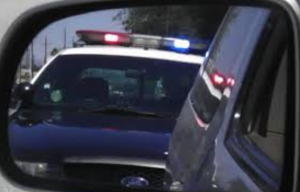 A few years ago I needed to make a trip to Hartsfield- Jackson Atlanta International Airport on behalf of the company I worked for at the time.

Keep in mind, this airport, year after year, is deemed one of the world’s busiest.

Also keep in mind that this airport, at that time was still under an code orange security alert after September 11, 2001.

I was in a brand new large solid black Ford Excursion with darkly tinted windows.

It still had dealer tags.

I was already running late so as I entered the airport property approaching the terminal I was certainly exceeding the speed limit.

I neared the terminal and heard that familiar sound of a police siren.

I immediately cursed the day that I was born for I knew I did not have my driver’s license, proof of registration nor proof of insurance.

When I pulled over to the side and looked in my mirror, there approaching me was a City of Atlanta police officer.

I knew then that I was going to “airport jail”.

As he approached the driver’s side, I placed both of my hands outside the window so he could see them.

Before he neared the drivers side window I said, “Sir, my name John Hembree, and I cannot prove that to you, because I do not have my driver’s license, nor proof of insurance, nor proof of registration and I was speeding. In fact, the only name that I can say that will be able to tell you who I am is (Major Name withheld).”

When I said that name, he looked at me, turned on his heels and as he returned to his car he said, “Slow down sir.”

As I pulled away, I called the person of who I had just offered up for identification purposes and told him of the power of his name.

We both laughed but that lesson stuck with me.

The power of a name.

I have long been fascinated by names, both mine and those I meet.

In fact, I told kids in elementary school I did not have a middle name because if I said my name is John Harley Hembree they would think I was weird and not believe me.

Now I tell people my name and they just think I am trying to be cool for an old guy, with the middle name Harley.

When I meet people who have a unique name I will ask them of its meaning.

Sometimes they will know but often not.

It is just so personal, they should know the meaning.

Maybe the most personal identification we have of ourselves and to others.

I read in an article regarding John F. Kennedy, Jr., before he was killed in a single plane accident, that when he would meet someone he would simply introduce himself as John, without his famous last name.

He just wanted people to be at ease.

Not for the same reason, but when I introduce myself I will often only say, “Hi, I’m John.”

Because I want them to immediately know that I wish to be on a first name basis with them from the start.

The simple introduction is becoming a lost art.

Few know how to introduce themselves anymore, without it being awkward or seeming insincere.

But when introducing yourself or being introduced to another, say to that person, “Hi Bob, or Hi Jim, I’m John.”

It breaks down the barriers.

The identification of that person by their name is the initial building block to establishing a relationship and touching that person’s life.

In the movie, Patch Adams, starring Robin Williams, there is a scene where Patch and a group of other medical students are moving through the halls with their instructor, stopping at various

patients and identifying them by their ailment or disease from which they suffer.
From the back of the group, Patch Adams asks, “What is her name? Does the patient have a name?”

It’s who we are, are and will continue to be.

So I would encourage you to say the person’s name when in a conversation.

Not like some programmed salesperson ending each sentence with the potential buyer’s name, but saying it just enough so that they feel an intimacy of connection in the conversation.

It will mean so much to them.

Recently, I was reading a book that dealt with relationships.

In the chapter on finding and building friendships, it gave an example that fits this thought perfectly.

It was a dialogue between a man and a woman who had recently gotten to know each other and were becoming close friends.

The author describes how she wrote her new friend a note and it said, “I have noticed that you say my name when talking to me. I like that. When I was younger, there was lady in my life who when

speaking with me would say my name. It has been years, and no one else has done that since…until now…until you. You will never know how much that means to me. To be called by my name.”

She was writing to a friend, but, each of us, any of us, could have been writing that to God regarding his love for each of us as individuals.

“Because he loves Me,” says the Lord, “I will rescue him, I will protect him for he acknowledges my name.” Psalm 91:14

The expression of love through the acknowledgement of a name.

God knows you by your name.