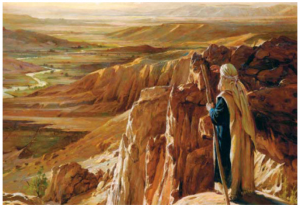 “And the Lord pointed out to him the Promised Land, as they gazed out across Gilead. ”

“It is the Promised Land.”, the Lord told Moses.

The Lord said, “Now you have seen it, but you will not enter it.”

Moses, one of the most well know historical figures, was to live out an almost life.

Born into slavery, through a miraculous intervention grew up in royal palaces as an Egyptian prince, gave up his title as a man to return to his enslaved nation, committed murder, remained in self exile for decades, returned to Egypt to challenge the most powerful leader on earth at that time, led his enslaved countrymen out of Egypt, parted seas, oversaw great military conquests, remained faithful to his God all of his life, and scripture tells us that, “There has never been another prophet like Moses, for the Lord talked to him face to face.  And at God’s command he performed amazing miracles that have never been equaled.”, and due to one act of irreverence and disobedience neither Moses nor Aaron would enter into the Promised Land.

So what hope do I have?

What chance do any of us have?

To live out anything but an almost life.

You may be like me, and I have heard others express this as well.

It may seem that you are looking out over the course of how your life was intended and you are not allowed to enter.

You can see it, but you can not touch it.

Did God care for Moses any less?

In fact, God himself, at the time of the death of Moses, at 120 years, Himself buried Moses in a valley in Moab, and hid the body so well that no one knows the exact place.

In the course of your day to day challenges, take the same approach that Moses did, even in spite of the fact that He would not see all that he had envisioned for his life.

He continued as a friend of God.

He spoke to God as one friend speaks to another.

We can not and should not ask for anything more.