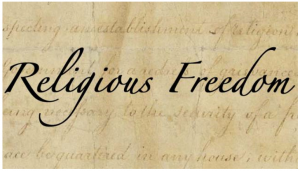 Earlier today, I wrote a letter to multiple members of the Senate of the great State of Georgia regarding the proposed S.B. 129.

Here is the copy of the letter.

Thank you for your service to the betterment of the great State of Georgia.

Regarding S.B. 129, I have been studying the issue of RFRA’s in various states.

Certainly, I am no expert, and you are those who have the resources to provide your Senate colleagues with information as to the benefits and non benefits of legislation and how it has either enhanced or limited the religious freedom of other previously.

Neither am I one who looks for witches behind every door and devils under every rock.

I am one though that considers historical precedent, and as I was sitting in church earlier today this thought rang out in my mind as clearly as the liberty bell tolls for believers of all faith across this nation.

Be mindful, that though specifically titled toward allowing religious freedom for all, that by beating back the agenda of those one might consider threatening at the front door, you may very well be allowing those who would bring harm to future generations in the back door.

A legislative body such as the Senate can not legislate morality.

Morality is governed by the heart of a man or woman and God alone.

However, an esteemed body such as the Senate, can protect my grandson, who is about to be born, from extremists who will one day declare his Christian faith unlawful, and may use the very liberty we provided to do so.

Thank you for your consideration of this email and again, for your service toward the beloved State of Georgia.