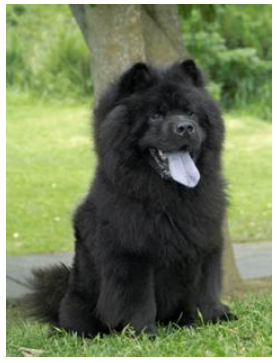 For our third Christmas together, I gave my wife, a full blooded Chow Chow.

I was working and going to school at night, our neighborhood was a little iffy and I thought a little extra protection while I was away was warranted.

What a surprise I had coming.

I would become the intruder.

A black fuzzy fur ball named Judah and three other cool names were on his papers.

Judah looked just like the associated picture to this entry.

As a puppy, he was loving as a puppy should be.

I thought he was going to be man’s best friend.

It turns out, he was going to be woman’s best friend.

As Judah grew into a young adult dog he and my wife became more and more attached, inseparable if you will.

I began to realize that Judah did not like me coming near her any longer.

He became very protective of her and her surroundings.

When my wife became pregnant with our first daughter, Judah went into protective overdrive.

The more pregnant she became the more protective he became.

This worked out great while I was away, but no so much when I came home.

As my wife’s stomach grew, if she was laying on her back, and I came into the room, Judah would position himself across her stomach.

His eyes would roll back and he would emit a guttural warning that came from somewhere way down inside.

I called a veterinarian friend of mine and asked him what was the deal with this dog, whom I had brought into our home to protect my wife, and me.

My vet friend, in turn, called a friend of his, a dog psychologist, and inquired on my behalf.  (I did not pay for this mind you.)

The pet shrink said that Chow Chows were originally bred to guard the Chinese Temple through history.  (You can find their likeness in pictures of a temple as well as outside of some Chinese oriented buildings.)

In their breeding, it was instilled into them that their sole purpose was to protect to the death.

How they did that, was to determine in their mind, what, or in this case, who, was the number one priority for protection.

The pet shrink went on, that Judah had determined that my wife was number one, he, Judah, was second, and I and anyone else was a distant third, if they mattered at all.

Eventually, before our daughter was born, I determined that it was time for Judah to go protect something and someone else, so we found a family very far out who also had Chows.  And a female Chow at that.

Though, I had tears in my eyes when I was driving him to his new home, I also was watching the rear view mirror to see if he was going to come out of the back seat and rip my jugular from my neck.

Men also have instilled within them an instinct to protect.

Maybe, it is protecting them by our prayers.

That we pray a “hedge of Job” around them.

That we assess in our lives what God has given us to protect to the death.

And we do that.

Just as God protected us to the death, through His son, Christ, we are to protect those to whom He gives us in our care.

“Blessed is the Lord, for he has shown me that his never-failing love protects me like the walls of a fort!”  Psalm 31:21