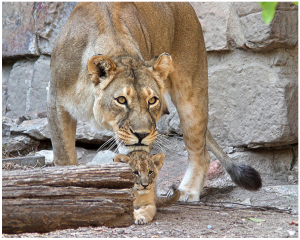 Simeon blessed Joseph and Mary upon being presented with the Christ child.

But then he turned to Mary and said, “A sword shall pierce your soul, for this child shall be rejected by many in Israel, and this to their undoing.  But he will be the greatest joy of many others.  And the deepest thoughts of many hearts shall be revealed.”

What an odd way to congratulate a first time mother.

And the one who had brought the Messiah into the world.

“A sword shall pierce your heart.” And, “This child shall be rejected.”

Mary immediately became a protective mother. She may not have totally understood the words of the angel Gabriel nor the prophecy of Simeon.

But she did know this.

That something most special was about to happen.

And, as the Bible says, “She pondered all of this in her heart.”

Inseparable does not adequately describe a mother and her children.

When my wife was carrying our first child, unbeknownst to me, a daughter, I had to resign myself to second place in the child’s life.

They would be forever inseparable.

As Mary protected her son, so a mother protects her children as well.

From skinned knees to broken hearts, a mother protects.

She soothes, she calms, she heals.

My own daughter within a very short time will become a mother for the first time.

I am confident that God is already preparing her with a shield of protection for her child.

I wonder if my daughter knew now, while carrying her son, if it were to be revealed to her that her son’s life would bring Hope to many, but ultimately he would meet much derision and physical pain and torture because of his faith, how would she not only prepare him, but prepare herself, as Mary did.

When Christ was being tortured and beaten, do you think Mary did not want to throw herself between her son and those inflicting such pain?

We often do not consider the sword being thrust into the soul of a mother as they experience their child’s suffering.

I have heard it said, “There are no words to describe the pleasure and the pain of being a mother.”

I am not sure I could add anything to that statement.