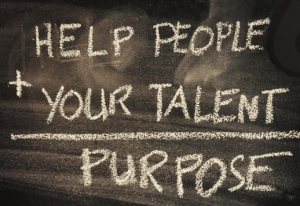 After a long career leading teams ranging in size from 5 to 1,200 people, I firmly believe that everyone is born with a gift… maybe not the gift we wanted, or a gift that is easy to see, but we all have one.

Now, I teach leadership for a living and I always strive to get people in touch with their gifts.  Some people’s gifts are more lucrative, like a genius level IQ that helps you invent software or the size and strength to play a sport professionally.  Some may be blessed with a great singing voice or the talent to write an incredible novel.  Some people’s gifts may be more subtle, and maybe less celebrated… but no less important.

From a gift perspective, a gift I have long admired is the gift that some people have of owning any room they walk in.  You know who I am talking about… those with that gift have a certain energy that commands the attention of everyone.  It’s a presence… a personal impact… a confidence that just not everyone has.  The room stops when they enter and they are immediately the center of attention from the moment they arrive on the scene.

You have to think that Jesus personified that gift.  Can you imagine the impact that he had when he entered a room or even a city?  The Bible is full of stories of how crowds reacted to Jesus when they caught even a glimpse of him.  Throngs of people mobbed Him when he appeared, but did he ever put on a show when he entered?  Were there fireworks?  Was a band playing?  A stadium announcer?  I can hear it now…  “Annnnd in this corner… wearing the beige hand woven robe and dirty sandals… coming to you by way of Bethleham in the region of Judea…  THE UNDISPUTED HEAVYWEIGHT CHAMPION OF THE WORRRRRRRLLLLLDDDD… JEEEEEESUHHHHHHSSSS CHRIST!  LET’S GET READY TO RUMBLLLLLLLLLLEEEEEE!  Thought that would have been really cool, but it never happened.  The loudest it ever got was locals running ahead shouting that He had arrived.  Despite the lack of theatrics, you KNOW that Jesus made an impact when he showed up.

What kind of impact do we make when we show up?

Do we have to have some awesome or apparent gift that ooohs and aaahhs others to make an impact on Jesus’ behalf?  I don’t think so.  I was looking at some scripture and this verse jumped out at me…  “And when they had prayed, the place was shaken where they assembled together; and they were all filled with the Holy Ghost, and they spake the word of God with boldness.” – Acts 4:31.

What does this have to do with our gifts and making an impact?  Simple… it is a recipe for owning any room for Christ that you walk into.  The recipe has parts: 1) “when they had prayed” ANYONE can pray.  Call upon the Lord and He WILL hear your cry!!!  2) those who prayed were “filled with the Holy Ghost”.  I have been full of a lot of stuff in my life, (myself, crap, BBQ, hot air, etc…) but filled with the Holy Ghost sounds pretty good.  3) “they spake the word of God with boldness”.  BOLDNESS people… you don’t speak of the Almighty with timidity.  That’s like lip synching the Hallelujah Chorus.  Not good.  Not cool.  That doesn’t mean making an impact with bombast and condescension that will turn off your audience.  It means speaking biblical truth the way Jesus did… with love and conviction.

When all of these parts of the recipe come together, what does scripture say happened?  The place they assembled was SHAKEN!  Now THAT is an impact!!!!  Being shaken means movement.  It means change.  It means energy.  Shaking wakes you up and makes you pay attention.  Ask anyone who has ever been in an earthquake…  you notice!

You don’t need to have a superstar gift to own any room you walk in, because He already is the superstar.  And with Him… you got this.  My question is, how many rooms or people are you willing to SHAKE today?  There are people in those placess that need to be shaken.  You have the gift – the gift of the Holy Spirit in you – to dominate that room.  The recipe is there…  so make your grand entrance like Jesus… humbly and with love… and shake up that room like His birth shook up the world.  You CAN do that…  He makes it possible!