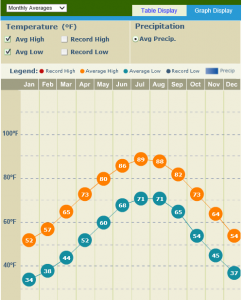 (Publisher’s Note: We published this piece a few weeks ago in October. However, at least in Atlanta, we have awakened to winter on November 1st.  It is for this reason that I am an April through October kind of guy.  So, at least in my mind, I am heading south, where oceans come and go on a daily basis.  In my mind, I will be back on April 1st.  Between now and then, I am getting in my car, pointed south, making one long stop along the way, and will send you a postcard when I hit temperatures in the high 70’s and low 80’s.  Please don’t wake me up, this is such a pleasant dream I am having.)

I am sure it’s just me, but with the exception of Thanksgiving Day and the day after, Christmas Eve, Christmas Day and…and…

…with the exception of those four days, I could go straight from October 31st of any given year to April 1st of the following year.

November through March, I consider “live through” months.

You have to live through those to get to the good stuff.

Earlier this evening on a long walk, I began to contrast and compare months of the calendar.

I was walking eight miles and needed to pass the time.

So, I picked my two favorite months of the year, April and October.

These two months are mirror images of each other.

Rain fall, less than an inch of each other on average.

By the way, maybe it’s because I have always lived here, but there is no other place to be, than in Georgia, April through October.

The views alone are breathtaking.

From the pretty and precious palms of south Georgia to the magnificent mountains of north Georgia.

But then again, I am somewhat biased, having experienced both.

April – A time to plant

October – A time to harvest

The book of Ecclesiastes states, “There is a right time for everything.”

I would much rather sweat than shiver.

I would much rather wear less clothes compared to more clothes.

“Watermelon don’t grow in the winter.”

On the next bright fall day you experience, stop and turn slowly 360 degrees and take it all in.

God did not create that masterpiece for it not to be admired.

The exquisite beauty of October.

There are few things, in fact, I can think of but one, that can compare.