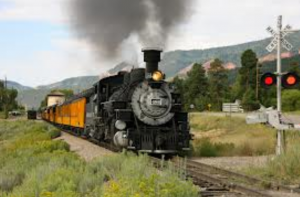 I try to walk or exercise of some form two hours per day.

This past week I was on a long walk and was a considerable distance from a train crossing that separates one side of the community from the other.

Everything stops while the trains comes through.

I heard a distant rumbling and I did not want to get held up that long.

I picked up speed and began heading for that crossing which was still some distance away.

The train was getting louder as it warned cars and pedestrians of it’s approach.

The guard rails came down, the bells were sounding, the whistle was louder.

I began to run, and as I did, I passed an older black gentleman who was walking, and I said, “Do you think I can make it?”

His response was, “I don’t think you can.”

I picked up speed and headed toward the crossing where two long lines of backed up traffic had formed.

A lady and her very large great dane was waiting, and I greeted the dog as I ran by, and headed straight for the crossing.

The train was approaching to my right.

You know when your mind goes into slow motion right before an accident happens?

My mind went into slow motion.

I could telepathically read the guy’s mind in the old pick up truck waiting, as he saw me and the train approach.

As I dodged one guard rail and then another, the engineer let out a loud blast, which I think was meant for me.

As I ran across and onto the other side, I felt, I don’t know…just for a moment…invincible.