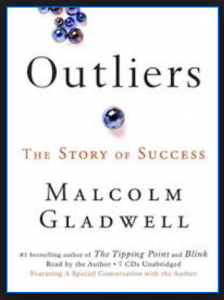 From the introduction of the book, Outliers, by Malcolm Gladwell.

1: something that is situated away from or classed differently from a main or related body

2: a statistical observation that is markedly different in value from the others of the sample

Why are you successful in the area of your strengths?

Not those areas which might potentially make you wealthy or famous.

But rather that, which makes you well above average in your talents and gifts.

Gladwell goes into great detail with true case studies as to why people succeed and fail.

For example, did you know that a very large percentage of National Hockey League players have birthdays within the months of January, February and March?

The percentage descends through April, May and June with few NHL players at the top of their game having been born in the latter months of their given birth year.

In Major League Baseball, again, a very large percentage of the best players have birthdays in July, August and September.

It is called the “Matthew Effect”.

Those that have much, more will be given.

When the United States was being settled, the success of one community can be traced in an almost mirrored image as to their ancestors success in a country in a foreign land.

In the Appalachian region of the United States, Kentucky and it’s border states, there were many feuds within families, for example, the Hatfields and McCoys, but several others.

Why was this relatively confined area more violent than any other part of the country at that time?

“The Culture Of Honor”.

Why did Korean Air have a horrific string of jetliners crashing, killing many, when other airlines succeeded in a decade of few instances at all?

The reason is so amazing I will not even try to explain it here.

Why were the industrial giants, the Rockefellers, the Carnegies, the Vanderbilts, Mellons, Fords, etc. all born within just a few years of each other?

Why were Bill Gates, Paul Allen and Steve Jobs all so close in age?

Why were the Beatles so popular?

Though this reads like a book plug, and yes, I am a Malcolm Gladwell fan, it is not just about this book.

There are reasons why you succeed or fail at something.

Reasons why you are below average, average or excel beyond all others.

And those reasons are traceable and fairly predictable.

Take into consideration every aspect of your life.

When were you born?

Where you were born?

To whom were you born?

If possible, go as far back as you can to your ancestors and see who they were and how they lived.

It may give you an idea as to why you are as you are.

In what academic, social or athletic environment were you raised?

Was it a negative or positive environment?

Why did you marry who you did?

It is much more involved than love and looks.

And these same type predictors are already at work in those who come after you for generations to come.

You are not an accidental biological miscalculation of conception.

Only a foolish person would consider themselves a product of a moment of passion between two people.

Begin to take into consideration who you really are.

Spend time reflecting how you came to be you.

It is more predictable than you may have been willing to previously acknowledge.

You are more specifically designed with purpose and for specific reasons that you could ever have thought of imagined.

“You saw me before I was born and scheduled each day of my life before I began to breathe.”  King Lemuel of Massa