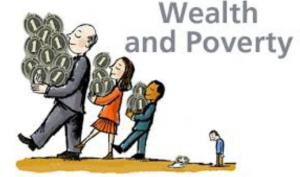 Which makes it harder to parent…wealth or poverty?

Don’t be too quick to answer.

From the book, David and Goliath, by Malcolm Gladwell, there is a section in the book which asks how much money is needed to be a good parent.

What would you say?

If you were like me when I first considered this, I was way off the mark.

According to scholars in the field, as brought out in the book, (and allow me a longer than usual quote here), “Money makes parenting easier until a certain point – when it stops making much of a difference.  What is the point?  The scholars who research happiness suggest that more money stops making people happier at a family income of around seventy-five thousand dollars a year.  After that, what economists call ‘diminishing marginal returns’ sets in.  If your family makes seventy-five thousand and your neighbor makes one hundred thousand, that extra twenty-five thousand a year means that your neighbor can drive a nicer car and go out to eat slightly more often.  But it doesn’t make your neighbor happier than you, or better equipped to do the thousands of small and large things that make for being a good parent.”

The book goes on to explain how that the two extremes, extreme poverty and extreme wealth, presents challenges in being a good parent.

And possibly, the wealthy have a slightly tougher time, (as in being a good parent).

Gladwell even gives the case study interview results from a super wealthy movie producer who grew up as a young child in tough economic circumstances.

The movie producer says it has been extremely challenging to instill an appreciation for wealth, because they did not have to earn it.  It was given to them.

Just something to consider as parents.

As you consider this matter, use the words of Agur ben Jakeh as a parenting prayer.

“O God, I beg, give me neither poverty nor riches!  Give me just enough to satisfy my needs!  For if I grow rich, I may become content without God.  And If I am too poor, I may steal and thus insult God’s holy name.”

A King stated it this way, “Give us this day, our daily bread.”