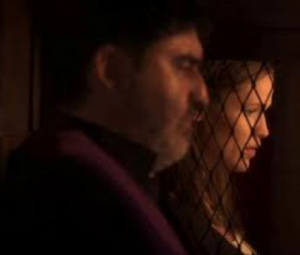 Recently I saw a teaser on line for a short film entitled Serena.

Well made and though provoking short film.

The subject matter for the film is more mature in content, no profanity or violence, but the film is directed more toward adults.

With that being said, the film is based in a confessional booth.

A woman confessing her sins to a priest and she begins to tell him of her love for a man which she describes as “unavailable”.

From there she bears her soul, her heart, everything regarding her love for this other person is laid out before the priest who is impacted by the level of the brutal honesty of her confession.

At the end of the confession she tenderly and almost in a childlike manner asks the priest, “Is there a sin somewhere in there Father?”

A deep question that probably only God can really, truthfully answer.

We as humans, and especially as followers of Christ, commit “pranks” and deem them sins.

We commit minor offenses that God would hardly notice and label ourselves as incorrigible, which is of a person or their tendencies, not able to be corrected, improved, or reformed.

For me one of the most heart felt questions in the Bible, right after “What is truth?”, is the following question, “Who then can be saved?”, found in Luke 18:26 as well as other passages.

Those gathered around Christ had just heard him say how hard it is to enter into the Kingdom of God, like fitting through the eye of a needle.

Maybe they looked at each other expressing disbelief as to who, if anybody, could follow this type of lifestyle.

I found myself asking that same question just this week, “God, who can follow this lifestyle of holy living?  Certainly not me.  God, I have never been more aware of my humanity than I am at this point in my life. How can you expect any of us, certainly not me, to live in such a holy manner.”

And then I ended my prayer by asking myself and God this same question, “Who then can be saved?’

I feel like the character Serena when confessing before God.

I lay out my humanity before Him, and even ask him why He “‘wired” me as he did, so that in life I am prone to fall short in loving people and loving Him as I should.

And then after telling God alone, things that would otherwise concern, frighten or anger my family and friends or even those who do not know me, I ask God, “Is there a sin in there somewhere?”

After all the “yucky stuff” is laid out before God He tells me to read the very next verse after,”Who then can be saved?”, and I do.

What I consider at times to be an unattainable and impossible lifestyle is actually, possible.

But only as I daily lay my life down and lay down those things that I desire for my own and each day, each hour, each minute, give me and them back to God.

So, I would encourage you today to lay out before God all the “stuff” of your life, leaving nothing unsaid, and then ask God, “Is there a sin in there somewhere?”

God will take it from there.