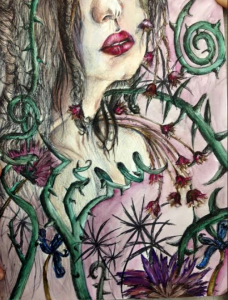 Earlier this evening, I took off on a long distance walk, not knowing how long I would be gone, how far I would go, nor which direction my walk would take me.

It was a walk of discovery.

Take this street, that alley, this trail, that dirt road.

Not knowing initially where I would end up, I came across two separate locations where people had taken their own life.

I knew of each situation indirectly.

One, of a thirty one year old woman, who was dating two men at the same time, one who was older and wanted her to marry, one who was her age, and neither man knew of the other.

The young woman went to a large undeveloped subdivision which was isolated.

Upon the side of one of the paved streets, she spread out a blanket, turned on a portable cd player she had brought with her, put on the song, by the Band Perry, If I Die Young, and shot herself.

As I continued my walk, a few miles later, I passed a house, of a prominent community leader, whose middle school aged son, went out to a barn behind their home, and took his own life by hanging.

People are often quick to say that, “Suicide is the most selfish act one can do.”

Knowing people who have attempted suicide and discussing this issue with them, it is often not an act of defiance, but an act of weariness.

Weariness in that they can not fight no longer.

They listen to the enemy which has all intentions of taking their life telling them their life has no existing value.

That there is no other viable option for them.

That this is the way to make the pain and the suffering go away.

Granted, these are lies of the enemy.

When I asked Brooke’s permission to use her work, I asked her for the details behind the painting.

Brooke said she was inspired to paint a young woman who was beautiful, yet found herself entangled with thorns and vines, representing the cares of this world and the daily pressures of life.

Look for those that you come in contact with that seemed entangled with no way to escape.

Those that would welcome rest from their struggles, their addictions, the weight of depression that hangs upon them.

Be open to let people talk.

Be open just to listen.

Look for the signs that one will display when internally, emotionally, even physically struggling.

And lead them to help.

I knew of a woman who loved her family, was a successful business person, but lived in constant, debilitating pain.

She simply wanted the pain to stop.

But there was much pain left behind as well.

He always has a purpose.

You may be the last person they reach out to.

Be the hope they need.