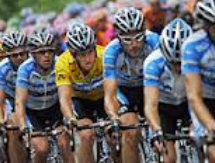 I was given a racing bicycle for my thirteenth birthday.

It was a road bike, a Fuji, Japanese made, that my mom and step dad purchased at a bike shop.

I rode it everywhere.

So I am reading with great interest the book Wheel Men, by Reed Albergotti and Vanessa O’Connell.

It is a book about the life and career of Lance Armstrong and the sport of racing as it relates to sports conspiracies.

If you read of his teen years and his explosion into success it makes perfect sense as to how his career ended in lies and a loss of glory.

Of all the positions on an international racing team, the one position that Armstrong did not want was that of the “domestique.”

It was one of the lowest positions on a team in terms of responsibility and strategy.

Yet one of the most critical.

The domestique would be the rider, or riders, who would be called upon, along with other members of the team, to block opposing riders from hindering the member of the team with the best chance of winning.  (Note related graphic showing Lance Armstrong in the center of his fellow U.S. Postal teammates.)

The domestique would be the team member, that would fall back and retrieve water and equipment, for the other members of the team, from the team car which followed them on the course.

The team member to get out in front of the rider on the team they hoped could win, on behalf of the team, and block the wind, giving the “star” team member an airstream with lack of resistance, so that he might save energy for the big sprint at the end.

“It is team tactics which so often win or lose races – and the lieutenants and the dog soldiers who expend their energy blocking chasing moves when they have riders up the road in a position to win. It is they who ride out into the wind so their aces can get an easier ride tucked inside their wheel [close to the rider in front and in his shelter]. Rare indeed is the major victory that cannot be credited in large part to the groundwork laid by the domestiques.“

The winner of the race does not go on to victory without the position of the domestique.

They do whatever is necessary, and whatever they are called upon to do, in order for someone else to succeed.

By the way, the French word, “domestique” is translated in the English language as “servant”.

Maybe you have been called upon to enable someone else to excel, and for them to receive the glory of the victory.

You may be the one that has been asked to block any opposing obstacle from hindering someone else from getting the big promotion.

I have been in that position before, in that my professional position was to give every ounce of energy I had to help fulfill the vision of someone else.

That was my role and I realized that without my singular efforts, the plural efforts of our organization, our team, would fall short.

Look for someone in your life, both professional and personal, where you can be their domestique.

It may be a spouse, a child, a friend, a colleague.

It might involve your church, or the non-profit organization where you volunteer.

It may be through a mentorship program.

What steps can you take; blocking the opponent, taking on the tough position of temporary lead in order to create an airstream for those following, or simply retrieving water?

They will not win without you.

And you can not win without them.

“Do nothing from selfish ambition or conceit, but in humility count others more significant than yourselves.”  Philippians 2:3