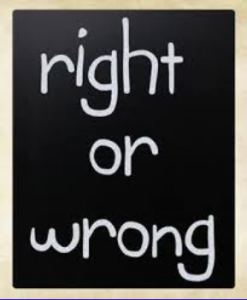 I have heard it said that right is clearly seen, easily chosen and wrong simply denied.

To me, that would have been a great line for Heath Ledger’s portrayal of The Joker in the Batman film series.

I would like to one day study the process our mind and our emotions as well as the physical body goes through involving either the decisions we make or the consequences of those decisions.

Both right or wrong.

Either could bring heart palpitations or a smile.

Good people have racing heart rates when they ask another to marry them.

Evil people often smile as they carry out a horrible act.

Adam and Eve: Disobeyed God and then multiplied the rest of the world’s population.

Moses: Kills a man with his bare hands, buries him, runs, and God picks him to lead an entire nation out of slavery.

Rahab the Harlot: City prostitute, lied to her own people causing them to be destroyed, except for her immediate family.   She becomes a hero of the faith and was included in the lineage of Christ.

King David: Adulterer, murderer, liar, feigned mental illness to escape his enemy and God calls David, “a man after his own heart.”

Bathsheba:  Adulterer, knew her husband had been murdered and by whom, marries the man who murdered him, has a child with that man, baby dies, has another child, Solomon.  Also becomes involved in the lineage of Christ.  “The virtuous woman” written of in Proverbs 31 may in fact be Bathsheba.

Samson: The man was a walking contradiction of strengths and weaknesses being played out in front of God and history.  He ended his own life by ending the lives of his enemy.

Thomas: Doubted with Jesus standing right in front of him.

Judas: The original “kiss and tell”.

Peter: Lied and denied.  Begins the church and becomes the first Pope.

God uses people of right and wrong, good and evil.

Look at you and I.

You know what you did, yet God still uses you in a wonderful and mighty way.

I began a Sunday School class once by stating, “If the leaders of this church knew me as I know me, they would have never allowed me to stand before you today.  Fortunately, God knows me as well and in spite of me. uses me, from time to time.  Let’s pray.”

The battle between right and wrong is fought every day within us.

At times, you might feel as though you are literally being torn apart in two different directions.

Be encouraged by that.  The enemy would not be fighting for you if God had not placed a gift and a calling within you to fight for.

Give daily to God your weaknesses, whatever or whoever that might be.

In return, God will give to you the strength to accomplish more for Him than you ever dreamt possible.