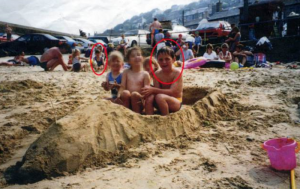 Nick Wheeler was building a sand castle with his family off Mousehole Beach, in Cornwall.

Aimee Maiden and her family were playing in the sand as well.

Only feet apart during each of their family’s holiday.

And neither knew of the other. 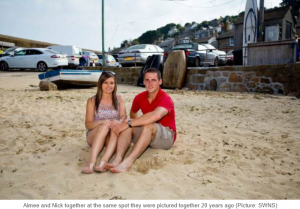 Until eleven years later when there families ended up at the same vacation spot in Cornwall, again.

And then to make it even better, they met again, one year later, as they attended the same college.

But neither knew of their childhood encounter until a couple of months before they were to wed.

In looking through Nick’s family vacation photos, Aimee screamed when she saw she and her family in the background.

You just can’t make this stuff up.

We are intended to live intentional lives.

We are who we were meant to be.