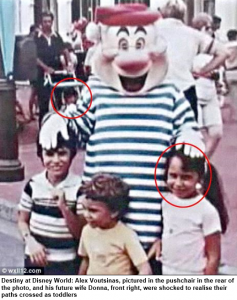 This picture captured me a few years ago, when I saw it on CNN.

I had to go back and find that story.

A few days before Alex Vousinas was to marry his fiancé, Donna, they were flipping through old family photo albums.

They had met at work, fell in love, they were engaged and were preparing to live the rest of their lives together.

Alex was looking through Donna’s photos of her trip to Disney World, in Florida, from some twenty years before, when she was a child.

Alex stopped when in one of the pictures he saw his father in the background of the photo.

One family was from Canada.

One family was from the United States.

Both families had ended up at Disney World at the same exact time.

Not just at the same time, but at the same exact second that a picture was taken, capturing their crossing of lives two decades before being engaged.

But true, all the more.

Whose path has your life crossed that you do not even yet realize will cross it again?

Do you think that a God big enough to create every living thing, the stars, the planets, solar systems, the depths of the ocean, bringing life to man from dust, can not cause two lives to intersect?

Allow God to be big in your life.

Believe that God can intersect your life with the people that He intended.

My eighteen year old, earlier today, texted me that she was excited about a possible study abroad program through her college.

She hinted that she knew it was probably impossible to even consider.

My text back to her?

He is as big as you will believe Him to be.