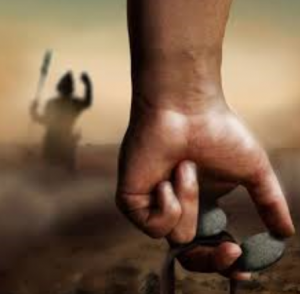 You know the story.

David reaches down into the stream to pick up five smooth stones, and upon releasing the first stone from his sling, kills the giant.

Then David takes the giants very large sword and cuts off the head of the giant and shows it to the opposing army.

Needless to say, the battle was over, the victory was won and King David changed the course of history.

A few years back, I was asked to address a group regarding the approaching New Year.

In order to leave a reminder with the audience, one they could walk away with, I went to a local Michael’s and purchased several bags of smooth stones.

At the beginning of the presentation, I distributed one smooth stone to every person present.

We went through the story of David and Goliath and how they would be facing their own giants in the coming new year.

Here was the applicable lesson.

That no matter how small you feel.

Or how big the giant seems.

It only takes one small stone to kill one big giant.

You’ve got giants in your life.

They scream at you.

They attempt to make you feel smaller than you already feel.

Giants do not fight fair.

King Saul, who was a pathetic leader in the first place, tried to coerce David into wearing Saul’s armor.

It did not fit him at all.

And the armor your friends may try to get you to wear into battle may not fit you either.

You have to fight the giants in your life, with the talents you have been given.

When you face your giants know ahead of time that you can defeat them.

You have to go into battle knowing that.

Pick up your smooth stone, (the gift God has equipped you with), and run toward, not away from your giant.

Not only those you oppose, but also those who support you will be amazed as to your courage, your strength and your ability to do battle outside of conventional means.

“The Lord does not depend on weapons to fulfill his plans – he works without regard to human means.”  1 Samuel 17:47 (TLB)