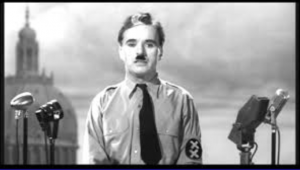 Before Technicolor came to the silver screen Charlie Chaplin, wrote, produced, directed, scored and starred in a movie entitled The Great Dictator.

It was produced in 1940 as a political – satirical comedy, poking fun at Hitler.

Even though it was intended to entertain and to bring comedic relief to the global tensions, the social message it sent was widely received.

List to the words of the speech very carefully.

Very insightful, even for us seventy four years later.