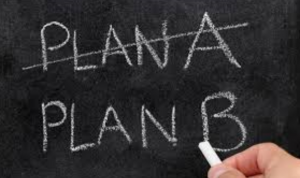 Something told me, that after my 18.1 mile run on my 55th birthday, there would be forthcoming a change of plans.

I had met my initial goal, even exceeded it, but…

…my calves were shredded.

So after running through the pain for a couple of days, and then pouting for a day, I put together, a change of plans.

Staying in shape would not be compromised.

So I went back to long distance walking and alternative means of working out.

Anytime there is a change of plans, there is a negative and a positive.

I would not be traveling as fast nor as far.

Both my male ego and my calves were damaged.

The slowed down pace would allow me to enjoy the distance I did walk and take in that which I was missing by running.

You may be looking at a change of plans as well.

Maybe this past week did not go as expected.

You need a change of plans.

Maybe this past week went well, but could have been even better.

You need a change of plans.

Over the past months and year your life took an odd turn.

Your career choice could have been better.

That fork in the road you saw five years ago?

The one where you should have gone right not left?

You just need a change of plans.

We all make decisions that could have, maybe should have, gone in another direction.

I found myself at a point several years ago, where I made so many wrong choices in a row, that I began to doubt myself in every decision.

I no longer trusted my ability to hear from God.

God, was that you?

Or was that me?

It all got fuzzy and I just could not tell between He and me.

Do not be afraid of change.

Change can be scary, but in the long run, can be for your best interest.

Even when you make plans for your future.

Actually, a whole lot of room to change your plans.

Give Him as much room as He needs.

He knows the way He wants you to go.

Trust Him and trust your ability to hear from Him.

He will help you distinguish between your plans and His plans.