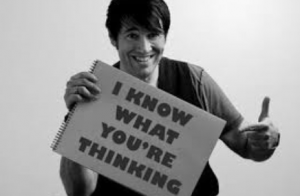 Having arrived a few minutes prior to the service starting I was catching up with my friend, Stephen Guinn.

First of all, I mentioned his full name, because I believe the guy is going to be famous.

Stephen is twenty one, always has a pack of cards in his pocket, and is an excellent, excellent, “master of trickery”.  (My phrase not his.)

This kid is amazing.

He sits down next to me and asks me to pick a card.

Of course, he guesses it without any trouble.

But the part that dumbfounded me, was that I was no more than twelve inches from his deck of cards and I watched him shrink the deck.

Literally, the deck of cards got smaller before my very eyes.

He had on short sleeves, so nothing up there.

I am intrigued by this gift Stephen is developing.

He tells me that one day, he would like to be a “mentalist”.

One who can read the mind or the thoughts of another person.

We end up sitting beside each other in church.

He lost his original seat, next to a girl, because he was entertaining me with card tricks.

There is a portion of the church service where a pastor will congratulate couples from the congregation on their wedding anniversaries.

The pastor will have them stand and then announce how many years they have been betrothed.

Stephen, being a bit of a showman, out of nowhere, when the first name was called, he turns to me and says a number of years.

Then the pastor said the number of years and he was so close it was scary.

Then he did it on the next one as well.

Following that portion of the service, a prayer was offered by our Senior Pastor.

Yes, I should have been praying and agreeing with the Senior Pastor.

However, I was sitting there with head bowed and eyes closed.

And this is exactly what I was thinking at the same time everyone else was praying.

“This little punk sitting next me is so confident, I think I will get one over on him.”

The Senior Pastor says, “Amen.”, and I turn to Stephen and say, “I have a number in my head.  Take that number and subtract three from it and tell me what that new number is.”

It was as though the kid was in my head the whole time.

I just stared at him and said, “You’re a freak.”

He laughed and we then focused on the song being sung by the choir.

Like I said, I think the kid is going to be famous.

May want to study psychology in college he said.

His future clients won’t have to even say anything during the session.

He will just read their mind and respond accordingly.

Interestingly enough, as I thought back on this during the week, a verse from the Bible came back to me.

“Jesus knew what they were thinking…”

There are four different references from scripture where this is mentioned.

In one instance, he knew that the religious leaders were judging him.

In another instance, he knew that his followers were worried about having no food.

In another, he knew that the men who had brought a woman to him in shame, was condemning her in their minds.

What about when it comes to you and I?

What are you thinking right now?

Do you actually think that it is a secret, never to be revealed?

Do you really believe that your mind can not be read?

Heck, the guys at Google and other futurist leaning technological firms can almost do that already.

I am talking about the good stuff however.

The motives of the heart and the intent behind the thought.

A few years ago, I began to be much more honest with God in my conversations with him and in my thoughts toward life.

Prior to that I was always hiding behind spiritual sounding phrases.

It was only recently that I began specific times of prayer with this statement, “God, you already know my heart.  You know my thoughts before I even think them.  Make my heart pure and give me the mental strength and capacity to be solely focused on You during this time we are spending together.”

If Stephen Guinn’s not reading your mind, which he may very well be, God certainly is.

“O Lord, you have examined my heart and know everything about me.  You know when I sit and when I stand.  When far away you know my every thought.”  Psalm 139:1-2