(Publishers Note: This entry was originally published in December of 2011.  I hope someone will be encouraged by it.) 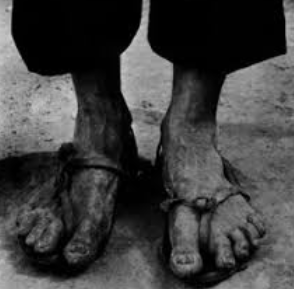 There are places we each find to be a safe haven, a “sanctuary” if you will.

Mine has always been just that; a sanctuary.

I have, throughout my life, been able to go into such a place and leave most of my troubles on the other side of the door.

This particular Wednesday night was no different.

For on that night, I found my sanctuary during the Wednesday night Bible study at my church.

With our Senior Pastor teaching a series on the book of John.

I settled into the back row.

And not just the back row, mind you.

But also the corner row with only three seats in it.

You cannot get any further back and still be in the sanctuary.

A few minutes into the teaching, our Executive Pastor came in and sat in front of me.

Not only was he in front of me, but, his full head of hair strategically blocked the visual sight line between me and Senior Pastor fully engaged in teaching.

It had been a tiring day.

I was sitting back there, unemployed, with few… well… really, no job prospects.

I will save the details of other circumstances going on in my life.

In short, I was emotionally and physically drained.

So I did what others do in churches across America, across the globe.

I closed my eyes and began to meditate on the goodness of God for a few moments.  (In case you are unfamiliar with this phrase, it means I dozed off).

And I did…for a few moments.

“Foot washing”, that was the word that woke me up.

He said it again, “foot washing”.

As a young child I had grown up in a church that practiced this from time to time, as it symbolized serving others before ourselves.

And then, I was awake, and listening to a passage of scripture I had read and heard many times:  the washing of the disciples’ feet by, of all people, Jesus!

Our pastor referenced the concerns that the disciples had brought into the room that night.

“Who would be the greatest among us?”

“Who would sit at the right and at the left of Jesus when He comes into His kingdom?”

All of them were looking for a position…a title.

We all do that.

In fact, many times we will take the more powerful sounding title, even if it brings with it a more modest salary.

We want the title printed on our card, so that we have a way of making an indelible mark upon those we present the card to.

What made the teaching on this fall night specific to me?

What was it about this message that had caught my attention?

When our Pastor said, “That while the disciples were looking for a position of prominence Jesus was trying to teach them discipleship is really about servanthhood.”

“The giving of one’s self to another.”

Inspiration had filled my tired body and troubled mind.

As he closed in prayer I began to send him a text from the back row thanking him for the teaching.

If only I could find a way to get this simple message into the hands of corporate leadership, head hunters, young aggressive executives, leaders in politics and dare I say it, leaders in the churches of all denominations.

We could accomplish so much more in our professional, personal and spiritual lives if we could follow this obvious, but at times, invisible approach to leadership.