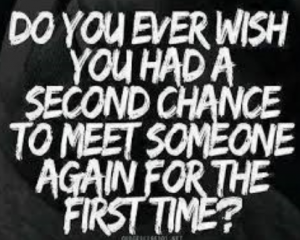 You only get one shot at a second chance.

I tend to think in terms of short, book titles.

Maybe it is that I have a smaller capacity to expound upon matters that require a longer thought process.

Let’s see how it looks as a book title.

You Only Get One Shot At A Second Chance

Max Lucado, in his book, Second Chances, wrote this.

“We humans are prone to failure, aren’t we?  We’re experts at muddying, mixing, and messing up our lives.  We’ve looked up from the bottom of a pit and realized we dig it ourselves; we’ve fallen so far we’ve wondered where to find hope.”

This is a topic I have personally wrestled with for some years now.

How many chances de we get with God?

One hundred and forty three?

According to Matthew 18:21-22, when dealing with others, we get four hundred and ninety.

Can you imagine a friend of yours who does the same dastardly thing to you for that many times?

And you are asked to, no, commanded, to forgive them.

“Then Peter came to him and asked, ‘Sir, how often should I forgive a brother who sins against me?  Seven times?’  ‘No!’, Jesus replied, ‘seventy times seven!'”

Most of us, me included, give a person one shot.

Blow that one, that’s it.

I do know people who sincerely forgive quickly.

I know others that the word, “forgive” is not in their vocabulary.

Personally, I am an “eventual” forgiver.

It may not happen immediately, but I will eventually forgive.

I try not to hold grudges beyond seven years, as that is the number for forgiveness.

God, being God, gives us as many chances as we need, for as long as we need, to find what we need.

And what we need is to discover his forgiveness over our lives, in order that we might forgive others as well.

Do we get second chances?

What happens at four hundred and ninety one chances?

I am not sure, but, I bet there is still enough grace and mercy to cover that one as well.