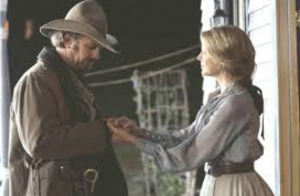 How is it that Kevin Costner, as Charley, in Lonesome Dove, can say to a woman, “You’re The Handsomenest Woman I Ever Saw”, and it sound so romantic.

Charley, (Kevin), could say, “I love you, you stupid, stupid, girl.”, and it would be interpreted as, “There are none thee, fairer, than you.”

If I said that, the conversation would probably end at the first “stupid”, even though it was intended as heart felt.

The word “stupid” can be interchanged with other words as a term of endearment.

But if Charley, (Kevin), were to say that…

…I guess when you are Kevin Costner, you can pull that kind of stuff off.