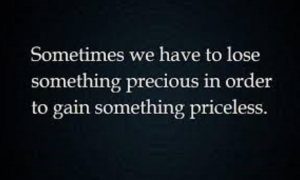 “Like a treasure a man discovered in a field.  In his excitement, he sold everything he owned to get enough money to buy the field–and get the treasure, too!”

“Like a pearl merchant on the lookout for choice pearls.  He discovered a real bargain–a pearl of great value–and sold everything he owned to purchase it!”

The words, “sold everything”.

These men, in separate instances, had found something that they considered personally priceless.

Even though there was an agreed sales price and a transaction, which would otherwise indicate the treasure, the field and the pearls were not priceless at all, but that a set and final price had been established.

But they were in fact, priceless.

To those men, because they sold everything they owned to purchase them.

Is there something in your life that you consider precious but not priceless, but that you would not wish to give up, in order to find the priceless?

Maybe something not in your life, that you would sell everything you literally own to possess?

That is exactly why Jesus used the illustrations noted above.

He was communicating to those listening, you must sell everything and follow me, in order to understand and inherit the Kingdom Of Heaven.

In some cases, he did ask individuals to do just that.

The rich young ruler approached Jesus, and said, “I have done this and I have done that, I have been obedient to every law.  What else must I do?”

Jesus told him, “Sell all of your possessions and give them to the poor.”

The Bible says, the rich young ruler walked away sad, for he had much wealth.

When in fact, Jesus did not want his money.

He was saying, there can be nothing else more important to you, than me.

Each of us, have most likely something in our life, that we have asked, or continue to ask God, “Anything but that, please do not ask that of me.”

It may not be accumulated wealth at all.

It may be a person, a career, even your children, or a spouse.

If anything in your life equates, or rises above your devotion to Christ and his teachings, then you, or I, have not sold everything.

Go back through your life, as I go back through mine, and take another look, to see if there is anything that keeps you from selling everything in order to find a priceless love…