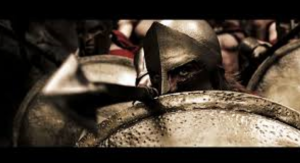 I just checked and according to on-line resources I use for study, the word “defeated” is not in the King James Version of the Bible.

I will leave it for others smarter than I to check the Greek and Hebrew from the original text.

Let’s for a moment assume that my resources are correct.

That the word defeated is not included in the Bible.

As much concerning war as has been written surely people were defeated, both the enemies of God and the armies of God themselves at certain points.

If space allowed I would like to show a comparison of two accounts both historically accurate.

However, due to the need for brevity,

I will encourage you to Google two battles.

Both involved heroic stands by three hundred men against opposing armies much, much larger and stronger.

Yet each of these groups of three hundred warriors made a stand of historic significance.

Regarding the Battle of Thermopylae in one account I read, The French philosopher Montaigne said two thousand years later, “there are triumphant defeats that rival victories.”

With Gideon’s 300 it has been written that when approaching their enemy that they, “each stood in his place around the enemies camp; and all the opposing army ran, crying out as they fled.”

In one story, three hundred men seemingly defeated but victorious in their accomplishment.

Three hundred men obeying a strategy only God would use against overwhelming odds and winning as well.

Are you part of a group of people that will join together and against all odds stand against a common enemy?

Are you part of a group that generations from now they will speak of your courage?

Will they take note of your accomplishments that seemed impossible but somehow you overcame and brought Hope to those who would follow?

God does not give people dreams and visions that they can do on their own.

He gives people who follow Him tasks that are impossible to accomplish outside of  His specific involvement in the outcome.

Look for ways to be inspired and inspire others today.

You are made specifically and uniquely to accomplish great things for God.

Stop telling God who you are not.

He already knows that.

He is trying to turn you into who He says you are!

So today, I would encourage you to do what I am doing on this day as well.

Identify your source of strength.

Identify those who are fighting with you.

Identify that which you are fighting against.

Be passionate in your defense of the Kingdom of God.

And prepare to make a stand like these men of 300.