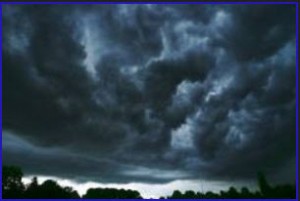 When I asked Dan how he was doing I anticipated a positive answer.

Dan is always up, positive, smiling and encouraging others.

However, when he responded that he had been given the best news this week I really tuned in.

Dan said, “I went to the doctor and he told me I had stage 1 prostate cancer.”

I thought for a second I had misunderstood what he had said.

But then he continued.

He said, “I went to the doctor this week to receive the results of recent tests as to the cancer they had found previously and if there were any other areas affected by the cancer.

When the doctor told me that I had stage 1 prostate cancer with no spreading I told him, ‘Doctor, that is the best news I have had all day.'”

Dan’s outlook made all the difference in the world.

Everyone has storms that blow into their life.

Your outlook regarding these storms can radically affect the outcome.

It can make the storm smaller or much, much bigger.

No one escapes the storms of life.

They will come and often they will cause temporary damage and shake the foundations of your faith.

However, temporary damage can be fixed and restored.

It is what you built your life upon.

Maybe the best news you may hear one day will sound like bad news to someone else.

You know it is God at work…

P.S. Dan came through it and out the other side with flying colors and is living healthy and happy.