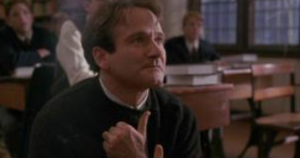 No matter how many times you say, “I have always wanted to…” or, “I think I could…” it does not matter, not even in the least, until you do that which you wanted to or thought you could.

From time to time, I will cross paths with someone who, for some reason, catches my attention.

A scene from Dead Poet’s Society had an impact upon me when it was released.

I find myself as did Robin Williams’ characte, not giving up on someone until something that is buried within in soul comes screaming out in all of it’s creative glory.

Others may be oblivious to the obvious.

The gift that is within you.

But you know it is there.

It is so strong at times you feel it will squeeze the last beat from your heart.

It is within you.

It was placed within you before you were even born.

Do what you were born to do.