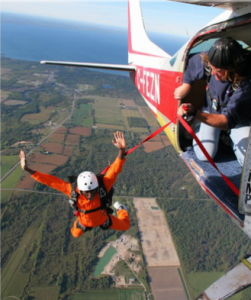 It was the perfect plan.

I had just turned eighteen.  At that time the legal age.

My mother was going out of the state overnight.

It was a Friday night.

A friend of mine, Mike Munroe, and I, had decided the next morning we would go to a place called Jump Greene County.

Yep, we were going to skydive.

Basically, you train for six hours and then you jump from a static line at the end of the afternoon from 2,800 to 3,000 feet.

As we ascended there were five of us.

Mike, the pilot, the jump instructor, myself, and a woman who somehow ended up in our group.

I asked to be first out of the plane.

If first out, there was no way of turning back.

Upon arriving at the desired altitude the jump instructor directed me to get into the door.

That meant basically, you are sitting in the door of the plane, one cheek in, and the rest of you hanging out.

He was patting me on the back and must have sensed I was tensing up, which I was.

The jump plane was so loud and the conflicting thoughts in my mind made it difficult to hear.

He basically scared me out of the plane.

The first seconds involved me freefalling and calling on every deity I had ever heard of.

Then the static line engaged and pulled my chute.

Once regaining some of my composure everything grew quiet.

I have never been able to describe what I felt and heard at that point.

The sky was so blue.

The fields, still far below me.

What I heard has been described by those who skydive and those who climb mountains at extreme elevations.

It was so quiet you could hear this defining stillness.

You could feel the quiet of the moment.

As odd as that sounds.

Maybe you are sitting in the door of your own adventure.

You have trained and you have faith that when you jump the static line will pull the chute open.

But you don’t know that it will…

“What is faith?  It is the confident assurance that something we want is going to happen.”  Hebrews 11:1 (TLB)