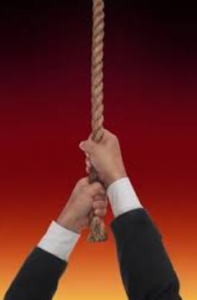 Since I am not a big believer in coincidence, I found it very interesting that this progression of events had happened on the same day.

I believe events happen for a reason and many times a very specific reason.

So, for whatever reason, two separate people had sent me a text or told me that that “they were at the end of their rope”.

When people use that phrase it can sometimes mean, “My sisters kids are driving me crazy and I am at the end of my rope.”

This was not that case.

Each meant I am literally at the end of my rope and attempting to find some rest and some answers.

I’m not a  psychologist but I am smart enough to know with each person it was serious.

So I did something.

At times, someone else just needs for us to do something…anything.

I went to the Dollar General store and bought a small ball of thin rope.

Then I proceeded straight to where one of my friends works, had them paged and I waited.

As they approached I said I have something for you.

I pulled out of my pocket a foot long section of rope which I had tied a frazzled knot on one end.

I pointed to the knot and said this is your end.

I pointed to the other end without the knot and said this is my end.

Placing it in their hand I had them hold on to the knot tightly and I gave it a strong tug.  I then made a promise as I continued to pull.

I said, “As long as you hold on to this knot I will be on the other end pulling and holding you up.”

“You must not let go of the knot.”

In similar manner I had a conversation with a man at a Subway last evening.

In both cases I told them to keep the small rope in their pocket as a reminder that both God and I were holding on to the other end.

There are many people at the end of their rope.

Sometimes all of us need a reminder to put in our pocket of God’s love.

We all need that.

So, if we all need that we can know that there are people all around us at any given time that need a reminder as well.

I try not to place God into a cookie cutter type of process.

But do this, go buy a small ball of twine or rope in a small diameter, cut it into foot long lengths and look for opportunities to tie a knot in one end and give it to people, strangers, whoever, that have come to the end of their rope.

They just need to know that someone cares and to be reminded that God is truly at the other end of the rope and will not let them fall, IF, they hold on.

Hope sometimes is only needed for a short second for someone to be rescued allowing them to continue forward.

And then for fun, download a song from the remake of the movie True Grit.

The length of the soundtrack is filled with hymns of the faith.

And there is one  song, that it’s musical theme is woven all the way through the movie, Hold To God’s Unchanging Hand by Franklin L. Eiland.

Just another reminder that God will not let us go.

And then take three promises into your day, and these are for each of us.

My bottom dollar bet is that God will over the next few days put you into the paths of some people where you can give a rope with a knot in it and a verse that promises He will not let go.

Tie a knot in it…and hold on.