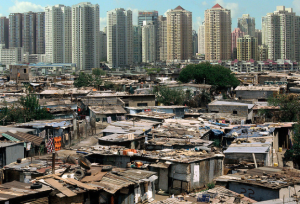 The difference between the rich and the poor?

Oh, you mean economic variation and end of year statements?

Those who live on two dollars per day and those who expend millions per day?

Oh, you must mean the difference between a house with eight bathrooms and four pieces of tin with no bathroom?

I have been poor.

Would I like to give being hilariously rich a shot?

Once rich, and I compared the two phases of life, could I determine when was I happiest?

I probably could not determine between the two.

You may be thinking you would rather be unhappy and rich than happy and poor.

Comfort does not equate contentment.

Nor does squalor equate sadness.

In the picture above who are the happier people?

Each if surveyed, and if honest, one might say the other.

Money gained is not happiness attained.

And money lost comes with a cost.

What if the residents of each community swapped places?

That would make an interesting case study.

Rich or poor, before God, we are each the same with no difference whatsoever.

“The rich and the poor are alike before the Lord, who made them all.”  Proverbs 22:2 (TLB)

“Give me neither poverty nor riches!  Give me just enough to satisfy my needs.”  Proverbs 30:8 (TLB)