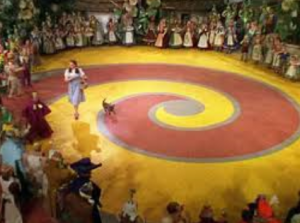 I could not tell who was squeezing whose hand the hardest.

Maybe it was her.

But it was probably me.

Even though it was only kindergarten, and her first day, my daughter, Savannah, was at the beginning of a long road.

Filled with lions, tigers and bears.

Even a witch along the way.

But at the end of the road was Oz.

With school starting for many children and others beginning college, nothing can replace education.

Until just a few moments ago, I did not know the origin of the word, “kindergarten”.

The name kindergarten was coined by Friedrich Fröbel, whose approach greatly influenced early-years education around the world. The term is used in many countries to describe a variety of educational institutions for children ranging from the ages of two to seven based on a variety of teaching methods.

Friedrich Fröbel (1782–1852) opened a Play and Activity institute in 1837 in the village of Bad Blankenburg in the principality of Schwarzburg-Rudolstadt, Thuringia, as an experimental social experience for children entering school. He renamed his institute Kindergarten on June 28, 1840, reflecting his belief that children should be nurtured of and nourished ‘like plants in a garden’.  Source: Wikipedia

When nourished they will grow.

Who is to say that a child beginning pre-school now might turn out in thirty six years to be an individual who may change society as we know it, or propel their culture into heights yet unknown.

Look at this way.

Give or take potential med-school, or law school, that is roughly thirty six years.

The road to Oz is full of frightful things, but it will certainly be worth the trip.

Nelson Mandela once said, “Education is the most powerful weapon you can use to change the world.”

And what a wonderful weapon it is.