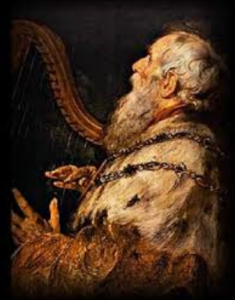 Historians have determined he was more than likely now in his latter years.

He had seen many battles, he had escaped assassination attempts on his life multiple times.

He had been betrayed by his king, his son and his close friend.

He had been mocked and adored.

He had gained wealth, power and fame.

He had plotted and carried out murder.

He was without integrity on multiple occasions.

He had watched his family slowly disintegrate.

His own children had raped and killed, each other.

Yet, he wrote some of the most beautiful words ever recorded in literature.

Words that have been recited, written and sung countless times.

He wrote of his joy.

He lamented of his sorrow.

He remembered the highest moments.

Yet it was the deepest and darkest periods of his life that he gained an inner strength that would inspire him to great exploits.

He would go through times of intense pain and suffering as well as internal and external turmoil.

He knew that he could climb the mountains in his life under his own strength.

But it was in the valleys of his life that he found safety and contentment.

Where he would smile yet have no reason for joy.

Where he would write of hope though the circumstances surrounding him seemed hopeless.

It was as though he was able to hide in the shadows of the very mountains that surrounded him.

The valley was his sanctuary.

It was the site of his greatest victories.

He would often voice to himself and possibly to others as they traveled in difficult situations, “I miss this place.  I miss who I am, when I am here.”

The memory of all of these years and events now behind him rushed through his mind as he sat down to rest his tired body and quietly said to no one in particular;

“The Lord is my shepherd, I shall not want.  He leads me beside quiet waters.  He restores my soul.”

Yet it was the following words that came from the deepest part of his broken heart that caused me to reflect upon dark periods in my own life.

“Though I walk through the valley of the shadow of death…I will fear no evil…for You are with me.”