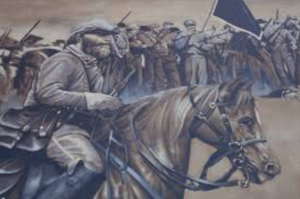 In a few short days, I and the fellow brave men of the 8th Georgia Infantry, Company 8, will no doubt approach, confront and engage in what will be our greatest challenge yet in this war.

Though this conflict has been declared as a war, I am hesitant to refer to it as a war.

As I see these days, past, present and future, as a dividing action that our once unified and growing nation may never recover.

Nor may any of us, especially me, see any day past tomorrow.

That is why there are so many privates.

Few live to be promoted.

In order that I might hopefully write you again in a few days, I will keep this letter brief.

You may find it interesting that in this company alone, Company 8, there are 11 men who are named Francis, 39 named George, more than that named James, and I lost count of all the men named John.

To avoid confusion on the battlefield, in the midst of receiving orders, I have been given a nickname.

As we were preparing for this current offensive move, one night, a very clear night, before we turned in, I spoke into the silent, somber darkness these words.

They have given me much peace during a time where there is little peace to be found.

‘Thou shalt not be afraid for the terror by night; nor for the arrow that flieth by day.  Because he had set his love upon me, therefore will I deliver him:  I will be with him in time of trouble.’

No one said anything after that and we went to sleep.

The next morning, the company chaplain, said that the men had been deeply moved by those words, and considered them a prayer for our safety.

He said that the men, if I did not mind, would like to nickname me 91, as a constant reminder of that prayer.

I would ask that you being a woman of prayer, offer those words to God as well, on my and our company’s behalf.

I believe you are one to whom God listens.

Hopefully soon, I will write you again.

My best to all those who remain constant in their hope that our nation, made up of Confederate and Union forces, will one day, again unite, together for the common defense of the liberties for which this nation was founded.

With warmest regards and fondly held memories of you, I am,