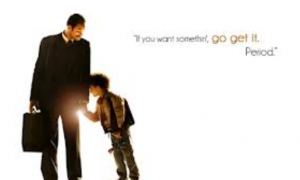 The words just come right out.

The words that we direct at others that only indicate the disappointment we have in ourselves.

In our own efforts.

In the movie, The Pursuit of Happyness, Will Smith plays Chris Gardner, who has two things going for him.

The love for his son and his determination to succeed.

In the scene displayed, he tries to protect his son from disappointment.

But at the same time, realizes that he is unintentionally killing his son’s dreams.

We, at times, with no intention whatsoever, set our children, and others, up to fail.

We shackle those we care about with the heavy chains of discouragement.

By the words that come from our mouth.

If we told our children, or those in our life, what they can be, and already are, as often as we told them what they are not, or what they will not be, how much more could they accomplish?

How much farther could they go?

We, are at times, again, most likely unintentionally, the biggest obstacle in the lives of others.

“Don’t attempt this, because I did not do well at that when I was your age.”

Or a husband might say, “Don’t write.  No one cares what you think.”

Or a wife might say, “Be satisfied where you are.  Let all these dreams you have go.”

Not speaking as to what you hope one day they may, just by chance be.

But what you see in them now.

For lack of an oft overused word, “proclaim” it over and into their lives.

My friend Kendall and I were once talking about the power of words spoken by others.

Spud Webb, retired NBA player, was 5’7″ and 132 pounds.  One of the smallest players to ever play in the NBA.

Certainly the smallest who competed in the 1986 Slam Dunk Competition.

What if someone had said, “Spud, you are about to embarrass yourself in front of millions of people.  You are 5’7″.  Do you realize how impossible it is to win this competition?”

Obviously, they did not know Spud Webb had a standing vertical leap of forty two inches.

Obviously, Spud Webb, when told it was impossible for him to win could not hear well.

You may have been told you are too dumb, too slow, too short, too tall, too thin, too fat, too this, too that.

You may be communicating these messages to those around you.

Surround yourself with encouraging and successful people.

Face life from a realistic perspective with an optimistic viewpoint.

Do not worry about the list of your weaknesses.

Those negative influences that surround you will keep that list on your behalf.

But you gotta go get it if you wanna get it got!

As Chris Gardner said to his son,  “You want something.  Go get it.  Period.”

“For I can do everything God asks me to, with the help of Christ who gives me the strength and the power.”  Philippians 4:13  (TLB)