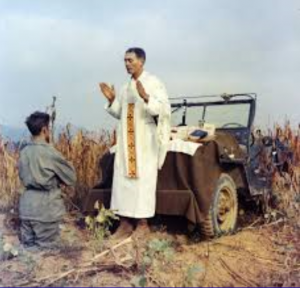 As an old story goes, in 1953 a man had just returned home from oversees, and ran in to one of his co-workers. The co-worker was surprised to see him, and asked if he had been out of town on a business trip. Turns out, the man has just returned from nearly three years in Korea, fighting one of the most brutal, most costly, most devastating and yet most forgotten wars in US history.

Indeed, Korea is one of the most forgettable wars in our history, and yet there are so many stories of death and loss of life from that brief war.

One such story is about a man named Ralph Nardella, who spent most of the war in a North Korean POW Camp, overcome with starvation, beriberi, and pneumonia.

One day, laying a sick ward, which was really only where the North Koreans took men to die, Ralph reached his lowest point yet. He remembers lying there, ready to give up the fight, when another prisoner came in and said to him, “Before you have an Easter, you must have a Good Friday.”

That man was Father Kapaun, a Chaplain who died shortly after that in the prison camp when the guards refused to give him medical care. This is just one example of the many ways Kapaun inspired the men, and kept them from giving up. Many POW’s credited him with their survival. Even today, his work inspired people. In 2009 he was posthumously awarded the Medal of Honor, and the Vatican is “Before you have an Easter, you must have a Good Friday.”

Those words stuck with me long after I had read them. How many times do I pray and look forward to the many little Easters in my life? The times when I share in Christ’s victory and by his power overcome whatever is facing me or holding me back. And yet, before Christ was victorious over the grave, He carried a cross. Before He sat down at his Father’s right hand, He felt His Father turn His back on Him. Before He watched his followers win the world for Him, He watched them abandon Him.

In whatever way, we are all standing before what may look like our Golgotha. The cross feels heavy, and yet if we look down, we will see the footprints of our Lord, who walked that road for us, and is standing before us, promising the same victory He experienced. “We do this by keeping our eyes on Jesus, the champion who initiates and perfects our faith. Because of the joy awaiting him, he endured the cross, disregarding its shame. Now he is seated in the place of honor beside God’s throne.” Hebrews 12:2 GWT