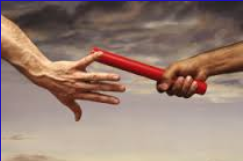 There is a reason that former Presidents of the United States do not hang out at the White House.

Because it makes the incoming and ongoing administration weaker than it should be and unable to find it’s own identity.

It is also rare that former Presidents speak out publicly as it relates to a current sitting President.

For the most part, with few exceptions, former Presidents keep a low profile.

Earlier today, when Microsoft Founder and CEO Bill Gates announced that he was stepping aside as CEO, Gates began the transition for the newly named CEO, Satya Nadela, to take the baton.

A smooth transition of power is what a company or organization hopes to maintain.

Rarely, if ever, does a smooth passing of the baton happen when the preceding officer, pastor, administrator, whoever it is or whatever the title they relinquish, simply will not let go of the baton.

When that happens, the race is lost.

No race is ever won when the baton is either dropped or a smooth hand off does not occur.

It’s a man thing…the grip of power and influence.

Pastors, once retired, have a responsibility to the new pastor to transition to a ministerial role outside that immediate parish or church.

The division of leadership only leads to a divided vision once the transition of power has taken place.

Officers of a company do as well.

Even fathers struggle with this.

Men, let the kid now be the parent to their children.

They need the practice, for one day,  when you are old, the roles will be reversed and they will be parenting you.

Why do we as men hang on to power when women seem to pass the baton of leadership with ease?

Possibly, most likely and probably.

We hold on to the baton at times long after it is safely in the grasp of a very capable runner.

Moses told the people to follow Joshua as they had followed him.

Moses then moved out of the way.

We as men have a responsibility to prepare the following generation and once prepared, to let them lead.

If we have prepared them adequately, we need not worry.

The baton is safely in their grasp.

“Teach these great truths to trustworthy men who will, in turn, pass them on to others.”  2 Timothy 2:2 (TLB)