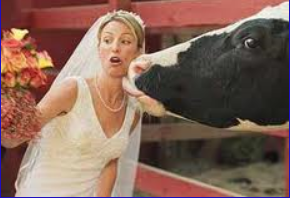 A few days back a cattleman, A. Howard, submitted a list of five things one should consider when buying a female cow.

Upon validating the list with the source, it began to dawn on me that this man is brilliant.

Not only is he wise as to how one should look for a good female cow, but the list can also be applied to the seeking of a wife.

Here is the list of five things to be considered when buying a female cow.

2. Did she save herself for the right male?

3. Did she have a motherly mom?

4. Did her father come from a set of good quality parents?

5. Does she have good hips?

Now let’s consider this same list as it relates to seeking a wife.

A young man has to consider this.  Take a long hard look at her mother and father.  Your future wife is turning into one of them.  What you are looking at in them is your wife twenty to thirty years from now.

What about your kids?  Do you want your kids to look like Peepaw and Meemaw?  They are going to look like somebody.  You might as well be narrowing it down to a woman with good looking parents.  As they say in little league ball, “Draft the parents, not the kid.”

2. Did she save herself for the right male?

With virginity a word you only hear in hushed tones, I believe it to be a valid consideration.

At the outset of the first date, a young man should ask the father and mother straight up, “Sir / Ma’am, I need to know, is your daughter a virgin?”

This will quickly narrow down your options.  Not because of the lack of virgins but because after you ask that question of the parents, your dating pool is going to narrow quickly.

And I do mean quickly.

3. Did she have a motherly mom?

Again, consider the parents.  Is the mother kind, affectionate, giving and nurturing?

There are enough challenges during marriage.  Discovering ten years into the marriage that your now wife is a terrible mother to your now kids can not be easily resolved.

4. Did her father come from a set of good quality parents?

Also very important.  If the parents of the father are living, spend some time with them.

Have they passed along traits that your potential father-in-law has either carried with him or discarded and then influenced your potential Mrs. in the same manner?

5. Does she have good hips?

Now this is a deal breaker.

She must have good hips and you need to spend as much time and energy as necessary to confirm, “Yes, this woman has good hips.”

Why in the world is this important?

Did you know that in humans, unlike other animals, the hip bones are substantially different in the two sexes.

The hips of females widen during puberty and the femora are also more widely spaced in females, so as to widen the opening in the hip bone and thus facilitate childbirth.

Finally, the ilium and its muscle attachment are shaped so as to situate the buttocks away from the birth canal, where contraction of the buttocks could otherwise damage the baby.  (Information Source: Wikipedia)

Again, back to the parents.  Any young man who has done his homework will ask the mother and father, “Sir / ma’am, I am going to need to become much more familiar with your daughter’s hips and buttocks so as to prevent any aberration or defect during the birth of our children.  And by the way, ma’am, I am going to need to consider your hips as well, and from the current observation, we may be looking at some considerable but moderate hereditary issues that may impact the birth of your future grandchildren and the future of mine and your daughter’s relationship.  Just saying.”

Again, these types of questions will further narrow your field of focus, which is a good thing.

However, if you can find a woman with good hips, you have found a good woman.

An applicable quote, “Watch the hips.  It’s all about the hips.”  Julio Miller

So it would seem, that my cattleman friend is both practical and prudent.

“You do not want an ugly cow, that comes from ugly parents, whose mother rejected her as a baby, whose father’s parents is the lowest common denominator of breed, and, a cow with bad hips is no cow at all.”

In short, what you are looking for is a fine bovine.

Back to the parents.

Upon introducing yourself, you should say, “Sir / ma’am, it is very nice to meet you.  Let’s cut to the chase, what I am looking for, is a fine bovine.”

After that, it is possible that the field of options will become so narrow that the choice will be obvious.

Thank you A. Howard.

Your insight into this thorny issue is going to catapult the future generations into a negative chronological direction.

And for that we as a society owe you many thanks.

Publishers Note: Any attempt to lend credence to the information in this entry as valid considerations for marital bliss is a good indicator that one who would… has way more issues to deal with than worrying about the seeking of a wife.