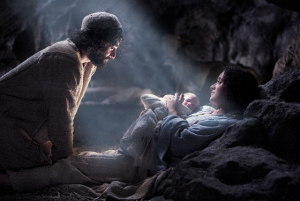 It is easy to imagine that Mary and Joseph were a young and unassuming couple.

Not wanting to make a fuss concerning the unavailability of a room, they quietly and probably with great appreciation accepted what space was available, in the stable.

With no parents nor extended family in that region she birthed the child alone, probably without the assistance of a mid-wife.

And in the stillness and silence of the night they heard men entering the stable.

Quite possibly some of the men in Bethlehem had heard of her claim to be pregnant having never known a husband and had come to drag her out to the street and stone she and Joseph.

Not expecting anyone I can imagine Joseph taking a protective position between these strangers and his wife and new born baby son.

I can also imagine the shepherds not knowing exactly what they would find or being able to explain how they found the child.  Except that a host of angels has appeared to them out in the fields.

A lot of uncertainty on everyone’s part.

Maybe the inn keeper checked in on them during the night to make sure the young mother was comfortable.

Maybe the cattle really were lowing.

Maybe the donkey that Joseph had placed Mary upon as they entered the city really was braying, announcing the arrival of this special child.

My imagination allows me the opportunity to visualize all of these images of which I believe to be a foundational part of history and Christian teachings.

But my hope is this.

That in the stillness of the night a king was born.

That in a quiet corner of a stable the Messiah had arrived.

And no one was there to receive him.

Except a few shepherds, one innkeeper, some animals and two young first time parents who were attempting to do as the angel had said, “Do not fear.”

The child from humble circumstances would increase and the government would be upon his shoulders and those in power would go to all lengths to retain their kingdom, to the point of killing all male babies in that area and eventually having the baby then grown to be a man tortured and put to death as well.

No palace nor all the rest of the trappings that come with royalty.

From such humble circumstances came a Holy king.

And billions, including myself, serve Him to this day.

“He has put down the mighty from their thrones, and exalted the lowly.”  Luke 1:52