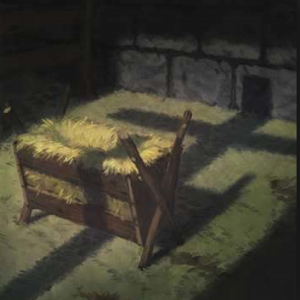 Not knowing the exact location of the birth of Christ nor knowing the location of his death we can determine however that the distance between Bethlehem and Jerusalem is approximately 5.52 miles.

However, it took Christ thirty three years to go from Bethlehem to Jerusalem.

From birth to brutalization.

From the crib to the cross.

Mary could not have imagined on the night of his birth that she would witness such inhumane acts at the time of his death.

It was beyond anything she could have thought or imagined.

The love she felt from him was beyond the love of any other man she had ever known.

Yet the love Mary felt for her son would not protect him.

Surely the shepherds would have protected him as they protected their flocks.

His father Joseph possibly should have never returned with the child from Egypt at the death of Herod.

But to be obedient Joseph did.

There was no protection for this baby.

The glow from the moon on a clear night over the stable cast a shadow the width of the manger.

There was no escape.

As Christ would find out in the garden as he prayed there was no alternative plan.

We too have no escape from the cross.

The next time you witness the glow of a new born baby consider the thought that the cross overshadows that child’s life.

It is up to us to teach the child the meaning of that shadow.