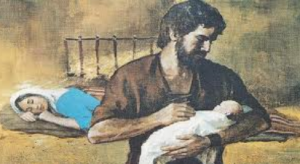 If you have ever changed a baby’s diaper you know that they can be filled with all kind of surprises, and not all surprises are good surprises.

I will leave it at that.

On Christmas Eve of 1989 families were gathered around the world in celebration of Christmas.

A small, gift wrapped box was handed to a young husband.

In the box was a diaper and in that new diaper was a note, that said,

“If all goes well this time, in September of next year you will be a father.  This is the greatest gift I could give you.”

That note announced a life that would change the world…mine.

The child would have my eyes.

I would love this child as my own.

When Mary and Joseph saw each other for the first time, after the angelic visits and after the dreams…how interesting that conversation must have been.

“I’m pregnant.”  A phrase spoken billions of time since Eve.

“I’m pregnant. And you are not the father.”  A phrase spoken millions of time since Eve.

“I’m pregnant.  And you are not the father.  God is.”  A phrase probably attempted at times but only once spoken in truth and only once believed since Eve.

I have considered if I could take a child that was not mine and love it as my own.

It takes a special man called of God to raise a child not his own as his own.

A level of love that I do not have the ability to comprehend, grasp nor fulfill.

However, Joseph could and did.

To love the child as his own.

He would call him by his name and the child would be his as well as Gods.

Only a very special man could do that, specifically chosen by God.

Specifically chosen by God to love and raise that child so that the child might change the world.

Who could have known who this child would become?