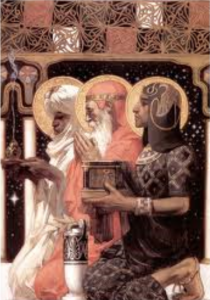 They had traveled a considerable distance just to get to Jerusalem.

And now they would have to travel further to Bethlehem.

Their pursuit of this Holy Child gave them an outlet for their understanding of astronomy.

A star would lead them to Him.

A divine dream would lead them away.

Encountering the child for the first time they sensed royalty.

Being men of cultural and social understanding they fell down, they bowed down, they acknowledged they were in the presence of greatness by the bending of the knee.

In researching art images of the wise men I found it interesting that the common denominator of these three individuals was their physical position in the presence of greatness.

Each of them had previously had others bow before them.

They had bowed before no other person until now.

They thought they were bringing gifts to the child when in fact it was the child who was the gift to them.

No longer would they have to search for great mysteries.

No longer would they have to consider difficult questions concerning life

They had found the answer to all of these.

Wisdom was right in front of them at last.

And in front of that child they knew they could not stand.