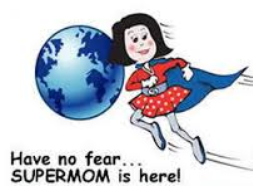 Though I have never been a mom, I had one.

They acquiesce that they are a mere mortal.

I am sensitive to moms for today, December 19th, would have been my mother’s eighty fifth birthday.

And I am sure she wanted to be a mere mortal at times.

Instead, she put on her cape, and did what moms do, she became a super hero.

So, to all moms out there, take a beach towel, pin it around your neck and fly into those lives that mean the most to you and that you are a super hero for.

I desperately miss my mom today.  She was both a Godly woman and a super hero.