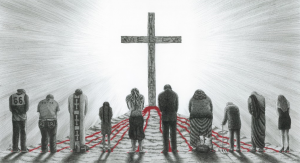 Recently I was at my brother-in-law’s home and in his house is this really cool theater room, projector, screen, theater seats, surround sound, really cool.

I popped in a DVD laying around called Cosmos. It was a scientific yet Biblical explanation of how big is this thing we call the “universe”.

I read a lot so I understand that the only thing small is us. This video went from earth to the solar system to the galaxy to other star systems and to their galaxies, to blue stars and all these really neat sounding celestial places and when showing a reverse picture as far as our human understanding has been able to grasp, the only thing unique about the Milky Way Galaxy, which is huge in itself, is that the Milky Way Galaxy is invisible to the even strongest telescopic lens, it is that small and the universe is that big.

I watched the video three times and still could not take in all the information.

It made me want to show that video to a group of college age students and as soon as it was over pick someone at random and say, “Now pray to that God.” My guess is the room would be silent.

Yet, as big as God is to create that which we can not even fathom, there may be something that is impossible for God to do.

To teach us as humans to forgive one another.

I have been dwelling much on forgiveness, redemption, grace and mercy.

After having seen Les Miserables recently, even more so.

I have sent pain and disappointment searing into those around me at times, we all have.

It’s our memory that often keeps us from being forgiven ourselves.

We all disappoint, we all cause pain, we all err.

Jesus dealt with it this way.

I love the human side of the book of Luke. In Chapter seven there is a story of a woman who the Bible describes as “woman in the city who was a sinner.”

No name, just a sinner.

She comes to Jesus and while weeping begins to wash the feet of Jesus with her tears and her hair while placing perfume on his feet.

Of course those unforgiving religious people who were always around Jesus pointed this out.

Christ replied, “For this reason I say to you, her sins, which are many, have been forgiven, for she loved much; but he who is forgiven little, loves little.”

Phrased another way, “Those who love big, also at times, sin big and are forgiven.”

It is important to remember that as Christ forgave us so must we forgive others.

That may be the one thing that God cannot do through Christ.

He can command for us to love one another.

He can declare we must forgive to be forgiven.

He can die so that we might be forgiven and thus forgive others.

But the one thing He cannot do is make us go to the foot of the cross where the blood still drips down, receive the blood and be forgiven for our own lives, and then apply that same blood to the sins of others against us.

We withhold the blood of Christ from others and by doing so, withhold it from ourselves.

I need the ongoing grace and mercy of God.

As we receive the forgiveness of God, may we grant it as well.